New updates are added at the bottom of this story…….

Google has been working on several big changes for Wear OS at once. Last month, the Big G began rolling out a Material You redesign of the Play Store app for the operating system.

With it, we got a very minor preview of YouTube Music which has been in the works for quite some time now.

You see, the updated Play Store UI now shows filters for “Watch” and “Watch faces” to find wearable apps that can be remotely installed on the watch.

Searching for YouTube Music on the store showed a listing of its Wear OS app when selecting the Wear OS filter. However, other than that, there was no other information present on the list.

Of course, this also means that no screenshot was present and the app was not installable. The takeaway from all of this was that Google was and likely still is performing internal testing for YouTube Music for Wear OS.

However, fast forward to today and there has been a rather confusing development on the matter.

TeamYouTube on Twitter, in response to a tweet from a user about localizing YTM for Wear OS, said the app was already available from May 2021.

But a look at the Watch OS subreddit would bring you to a post from a confused user who still hasn’t gotten YouTube Music on the watch version of Android.

As it stands, said availability never really happened. And those who are eagerly awaiting its arrival, especially former users of the now defunct Google Play Music service, are waiting for the app to arrive by now.

So why would YouTube on Twitter claim that YTM for Wear OS has already rolled out, that too months ago, despite the presence of clear evidence pointing to ongoing development of the app?

Honestly, we have no idea. It is possible that the rollout of the service for Wear OS actually started in May for a very small group of users. But there is no evidence to support this.

The reality is that Watch OS users who were used to Google Play Music were unreasonably forced out of the service and continue to have no suitable alternative.

Either way, we’ll be keeping an eye out for Google’s next move for YouTube Music on Wear OS and updating this article accordingly, so stay tuned to PW.

11:23 a.m. (IST): New reports now indicate that YouTube Music may not be available on older Wear OS 2 smartwatches. More on that in Google’s own article here.

1:43 p.m. (IST): Although we still don’t have a standalone app for YouTube Music on the Galaxy Watch 4 and the Tweet about app availability has been removed, demand is still quite high.

Now, a YT Premium user has shared some screenshots, a first impression of YouTube Music on Wear OS 3.

Also, it is mainly designed for offline playback as the only way to play music is after you select and download your favorite songs or playlists. More on that here.

12:51 p.m. (IST): After months of speculation, we now have an official release statement for the YouTube Music app for Wear OS 3. However, the experience seems a bit limited for non-premium users. Here is the statement.

We’re launching YouTube Music for Wear OS. Watches running Wear OS 3 will be able to take advantage of an all-new app that lets you easily browse your playlists, recommendations, downloads and lets YouTube Music Premium subscribers download music for offline listening without ads, even without your phone nearby. The app also lets you control playback more easily and gives you the option to add songs directly to your library with the “Like” button.
Available to Premium members with devices running Wear OS 3*
*Free tier members can only listen to their downloaded music.
Source

10:51 a.m. (IST): YouTube Music is now available on a number of Wear OS 2 devices. According to a Google employee, more are expected to join this list in due course. 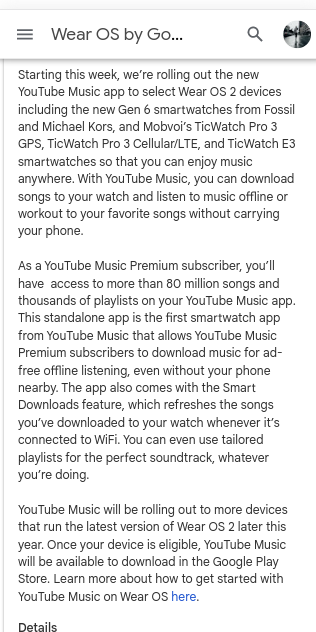 “Starting this week, we’re rolling out the new YouTube Music app to select Wear OS 2 devices, including new Gen 6 smartwatches from Fossil and Michael Kors, and TicWatch Pro 3 GPS from Mobvoi, TicWatch Pro 3 Cellular/ LTE and TicWatch E3. smartwatches so you can enjoy music anywhere. With YouTube Music, you can download songs to your watch and listen to music offline or practice your favorite songs without carrying your phone.
Source

1:28 p.m. (IST): The YouTube Music app on WearOS now allows music to be streamed over Wi-Fi or LTE. Now you can listen to music even when your phone is not nearby.

PiunikaWeb started purely as an investigative tech journalism website with a primary focus on “breaking” or “exclusive” news. In no time, our stories were picked up by Forbes, Fox News, Gizmodo, TechCrunch, Engadget, The Verge, MacRumors and many more. Would you like to know more about us? Head here.